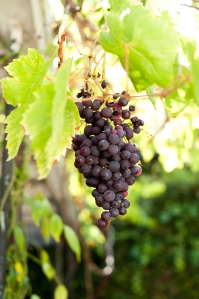 While tending to the small vineyard in our backyard, I noticed the grapes growing up and over the garage were not as plentiful as last year.  Thinking it was due to the new Los Angeles water restrictions the city implemented to move towards sustainable water conservation, I accepted the few grapes that had came forth and appreciated them all the more.  But it wasn’t until a few days later that I discovered the real reason for my lighter than usual harvest.

It was late in the night, well past midnight.  Kristy and I were sitting in the back office catching up on each other’s day when all the sudden we heard through the screen door what sounded like someone eating.  Startled, Kristy jumped up from her seat.  Trying to stay calm myself, I got up slowly from my chair, flipped on the back light and cautiously peered out the screen door.  As my eyes adjusted to the dimly lit backyard, I heard the rustling of vines over the garage.  Looking in the direction of the sound, I was pleasantly surprised to find a rather large raccoon sitting up and looking right at us eating our grapes.

Relieved it wasn’t an intruder and taken back by the sheer beauty of this creature, Kristy and I stepped outside to get a closer look.  Unaffected by our presence, he continued to eat while staring back at us as if we were just as interesting to look at.

As we watched him eat, Kristy exclaimed, “But he’s eating our grapes!”

Not wanting to fight with Mother Nature or even knowing what to do even if I had wanted to, I asked in all sincerity, “What if we made him ours?”

“Well, if we made him ours, accepting him as part of our family, he wouldn’t be eating grapes that weren’t his.” I replied.

Making him ours, we shifted our perspective from wanting him to stop eating something that wasn’t his to hoping he was enjoying his grapes as much as we enjoyed watching him eat them.

After some time, appearing to be satiated, our newfound family member slowly turned and disappeared into the night.  Wishing him a goodnight, we headed to bed, feeling fortunate to have had the opportunity to spend such quality time with our raccoon.

A few days later, just as Kristy was leaving for work, she turned to me and said with a smile, “I think I heard our raccoon eating again last night.”

“He sure is a noisy eater.”  She remarked.

“Yep.  He sure is.  If only we could teach him to eat with his mouth closed.” I replied.

Making him part of our family really opened our hearts.  So much so that I can’t help but wonder, “What else in my life could I make ours?”